Our Time in Eden - Prologue

Verge of History: Our Time in Eden

Renee opened her eyes and stepped out of the assembler rig that had just put the finishing touches on her brand new perfectly human looking mech. She admired the spiral tattoo covering her exposed hands. The same motif sprawled across her entire body.  A fitting homage to the moment.

The sterile assembly room was filled with the sound of metal ripping and being pounded into submission on the other side of the wall next to the sealed door. Renee sighed and gently grabbed a hand rifle from the nearby table as two other robot arms completed the gun’s final assembly, complete with its first magazine. She casually inspected it as several more magazines were pulled by robot arm from a nearby object printer and set on the table Renee leaned against.

The voke request was accepted and she heard a male voice coming apparently from inside her head calmly saying, “You’re not leaving this room in one piece.”

Renee just as calmly replied, “I don’t have to. You know I’ve already won. They see you now.”

Renee could see that the last metal layer of a large piece of the wall had already been rapidly weakened with drill and torch holes. It was time. She stood tall in the middle of the room and cradled the small rifle in her arms. 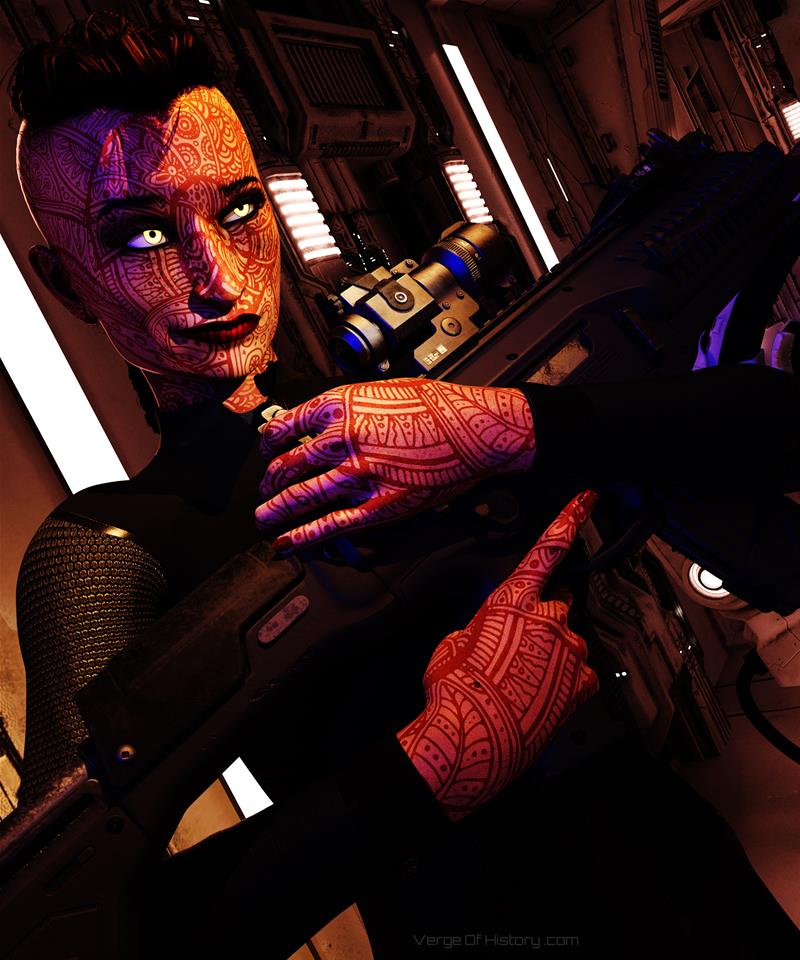 A heavy leg kicked the compromised wall section into the room. From all around the room machine guns began firing into the breach. The mechanical monster that had kicked in the wall lurched in hitting a stack of metal containers. It flailed a little under the hail of bullets and then stopped dead. Some of the sentry guns around the room continued their suppression fire into the wall’s breach. Another four legged machine like the first burst into the room and then a second followed. Most of the sentries engaged them as well.

The assembly room was a fully stocked light factory. Its dozens of small object printers were transforming feeds of raw materials into bullet barrel magazines as fast as they could. Larger mechanical arms threw the completed barrels as fast as they came out in the directions of the sentry guns. Each had a small arm capable of catching the barrels and loading them as soon as the previous barrel ran dry.

One of the two large attackers ignored Renee and threw itself at one of the two bigger assembly arms. The arm could not move out of the way fast enough and was ripped off its gantry. The attacker collapsed with it. Behind the first two beasts followed a flock of flying drones.

Renee ramped up her mech’s cognitive perceptual speed to its maximum of about 25 times human standard. Everything slowed down to a crawl for her. She began to crouch and shoulder her rifle as fast as her mech could move. Which now seemed unbearably slow. But she knew it was faster than any human body possibly could. In her visual field all the flying drones were now box lit. Green boxes showed which ones were already targeted by the sentry guns. Those not yet targeted had red boxes. Renee took aim at the nearest one. Her mech’s slowness didn’t bother her so much now that her targets all moved like grandma wading through honey. As her rifle hit her shoulder and its electronic sight came into view Renee pulled the trigger. She knew she would not have to aim precisely. Tiny jets of flame at the far end of the gun refined the targeting. And after a few seconds of Renee’s perceived time the gun finally fired its first round. Several more seconds later it fired a second round. She started aiming at the next target while still pulling the trigger. As the gun refined its aim at this second target Renee saw the first one burst into a shower of parts as the first explosive round detonated dead center on it.

The room was filling with a cloud of debris from all the drones exploding upon entry. But there were too many to stop all of them. Any that got close to Renee were given priority by the sentry guns. So the drones instead targeted the sentries. Renee was startled by the occasional grinding pop of a round exploding near her. She knew the sentries had to aim directly at her head sometimes in order to take out a drone.

Meanwhile the last hound-like attacker was struggling with all its remaining strength to inch closer to Renee. In one final effort it leaped into the air and exploded. The slow motion wave of concussive force and then fire shredded and seared Renee’s clothing and most of the skin on the front of her mech. It sent her sailing a couple meters backward toward the floor. She managed to hang on to her gun and curl up into a ball so when her back hit the floor she just rolled over until her feet caught the floor as well and the momentum carried her back to a standing position. This all took over two agonizing minutes from Renee’s perspective. Before she was even fully upright she was already firing at the next drone.

Several other machines had raced in through the wall breach and crouched near the floor behind makeshift shields of thicker metal they carried in. They fired through holes burned into their shields mainly at Renee. She had no armor at all. Her mech was designed to mimic the weight, grace, and responses of a real human being, not survive a battle. She stood tall as parts of her mech were blasted away.

Renee had kept the voke connection open with her tormentor. She voked, “This isn’t over liberate. I’m just getting started. See you soo—”

Author's notes
These are private notes kept during writing and made available exclusively to generous patrons. Thank you.
The author kept private notes while writing this section. These are available to patrons. If you are one, please be sure to log in to see these notes. Below is a brief excerpt.

Welcome to Our Time in Eden. This is your teaser of what’s in store.

I did not write this section first. I was already nearly 90k words into this story before I finally got around to writing this. Although I like the slow rolling start we see in the next section, where we get a better introduction to our main character and the world, I thought the story deserved a proper jolt to kick it off.

Hopefully you see some of these promises as you ask yourself some questions. Who is this Renee Parrish chick? How can she be so calm about a battle she’s been expecting? Did she know she would lose it from the outset? Why would she figh...

Become a patron to see the rest of these notes.